The Diwalwal Gold Project is located approximately 120 km northeast of Davao City on Mindanao Island in the Philippines. Tribune has relevant interest in the 729 Area and Upper Ulip subdivisions of the Diwalwal Mineral Reservation. The region is located east of the Philippine fault system in the Southern Pacific Cordillera, which hosts a north striking band of epithermal gold deposits. The Diwalwal Project area geology is dominated by Cretaceous to Paleogene volcanics consisting of andesitic to basaltic lavas, pyroclastics and volcaniclastics. The volcanic units have been intruded by Miocene diorite. These units are unconformably overlain by a series of younger sediments. The gold mineralisation at Diwalwal is classified as low-sulphidation epithermal type with gold-bearing quartz veins hosted in extensional fractures developed predominantly within the lava sequences. The 729 Area and Upper Ulip contain mineralised veins with the most significant located to date being Balite and Buenas Tinago, located within 729 Area. Both of these veins have been exploited by small-scale mine operations via numerous access tunnels and adits for several decades. 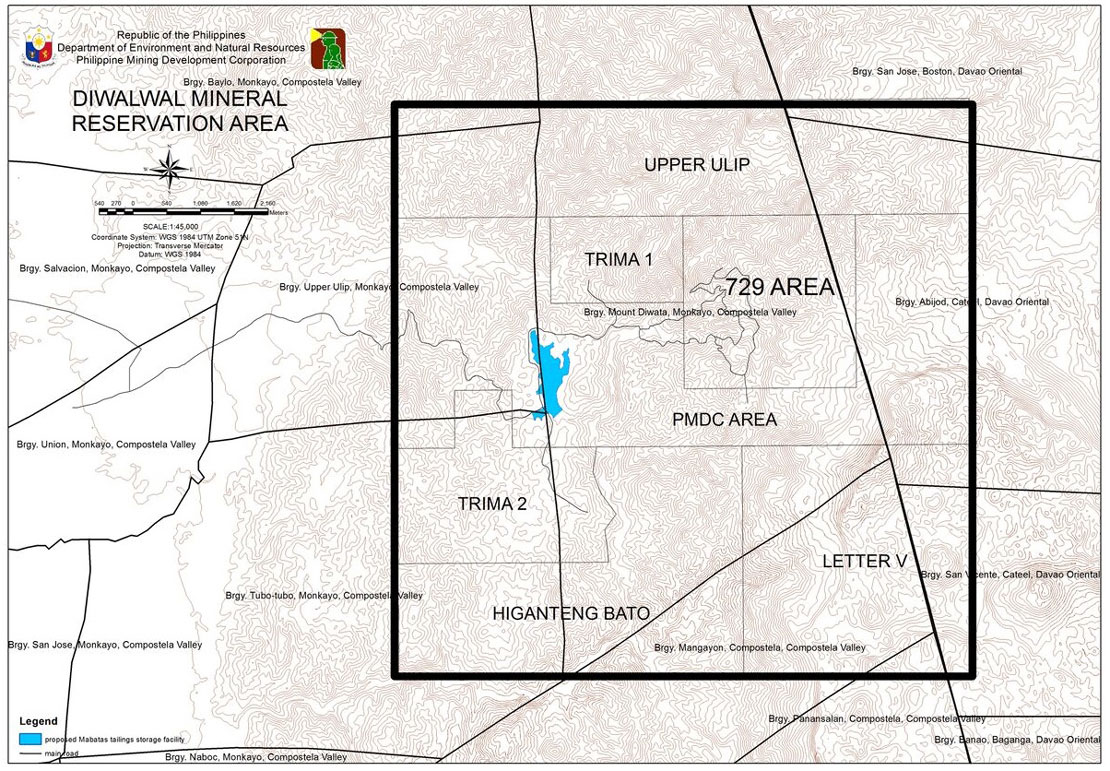 Tribune has the rights to the Balite mineralisation within 729 Area below an elevation of 600 metres above sea level. Access to Balite is by the Victory Tunnel and refurbishment of the tunnel to establish diamond drill positions and explore the vein system further has been the principal focus of activities since acquiring the project. Significant progress in access refurbishment has been made and drilling commenced in September 2020. The Company plans to initially drill around 6,000 metres of diamond core through the Balite vein system to confirm past drilling results and close up the existing drill spacing which will then allow a Mineral Resource estimation to be undertaken. Step out diamond core drilling to explore the vein system to the east and at depth from new development drives will follow the initial drill phase.

Plan view of drill holes with lithology and gold grade 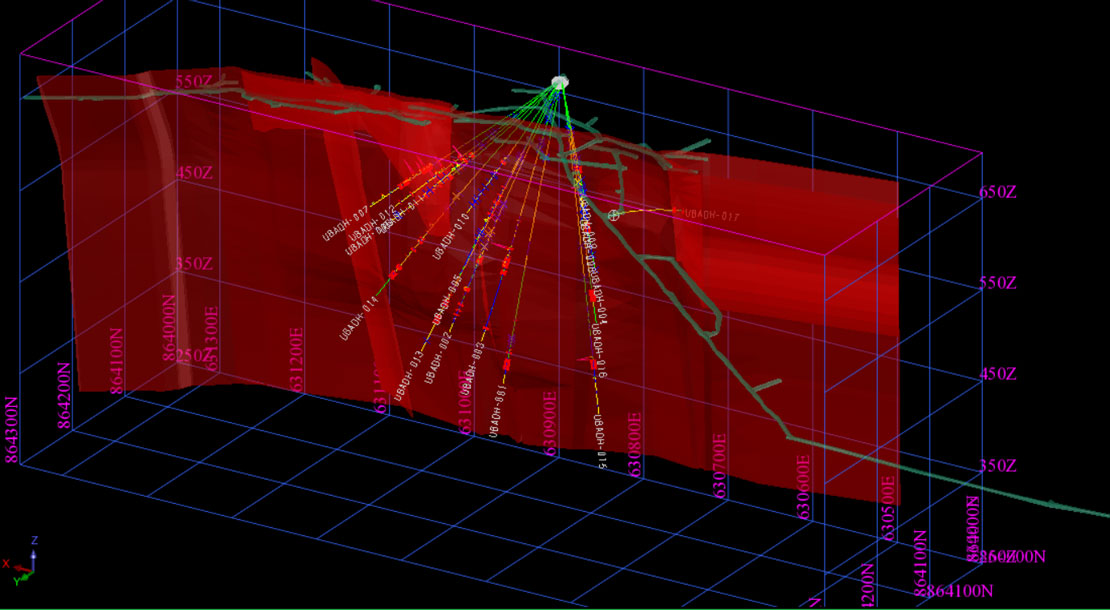 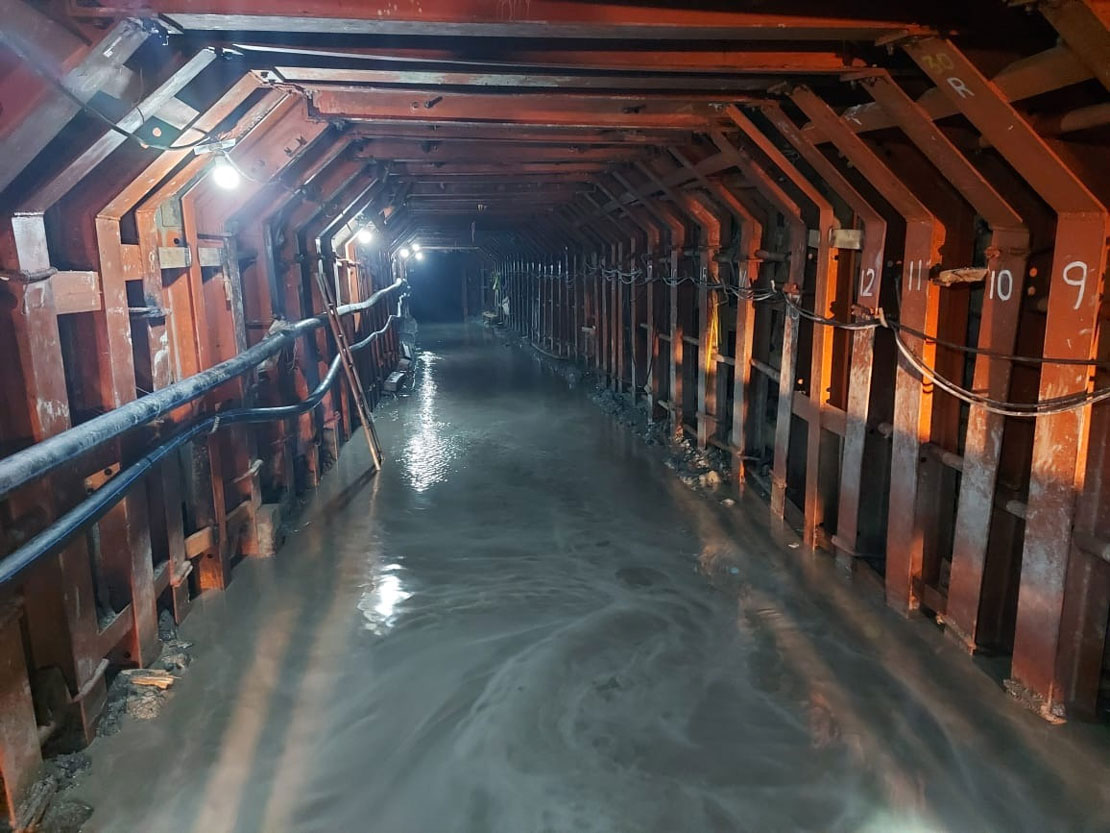 Refurbishment of the Victory Tunnel

Whilst refurbishment of the Victory Tunnel access continued, exploration work was focussed on the Paraiso Prospect within the Upper Ulip Area, as shown in the accompanying plan. The Upper Ulip Area contains several low sulphidation style epithermal veins hosted by porphyritic andesite volcanics in similar structural setting and orientation to the Buenas Tinago and Balite veins within the 729 Area immediately to the south. 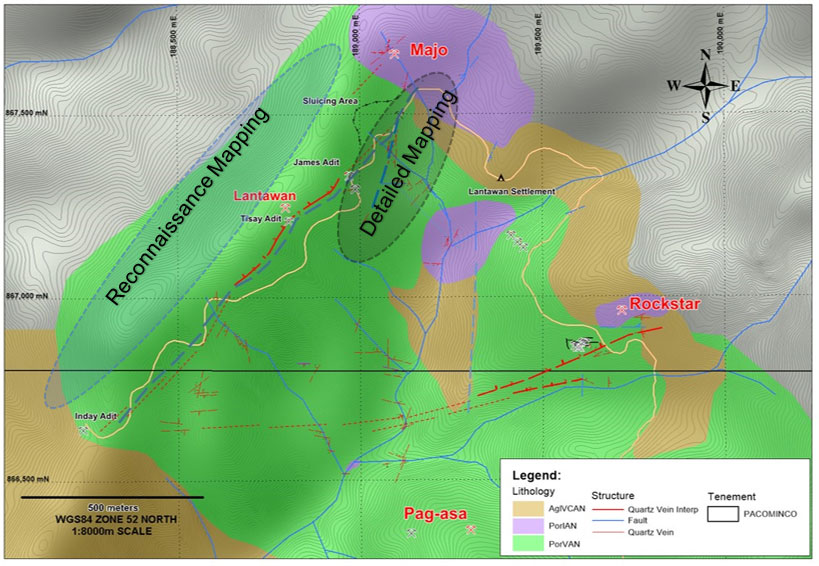 Geologic map of Paraiso and coverage of groundwork 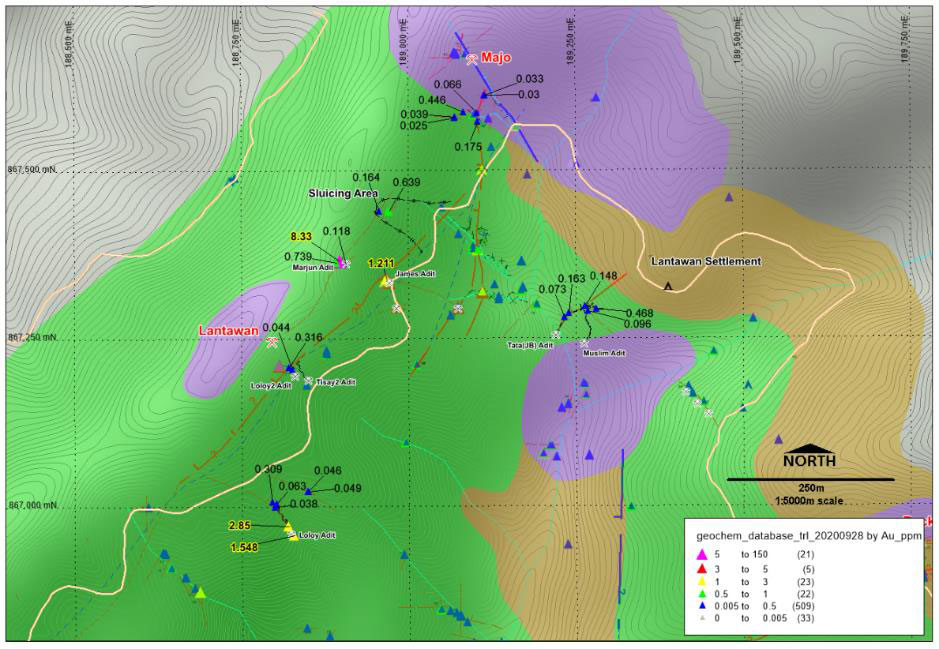 Rehabilitation of a Small Scale Miner tunnel where a 16ppm gold muck-out sample was taken.

Work during the year involved geological and structural mapping with a focus on orientation and characterisation of quartz vein exposures, grid soil sampling and rock chip sampling of outcrop and artisanal mine workings. The soil geochemistry grid extended the coverage of an historical but incomplete soil sampling program by previous operators with analyses of soil and rock samples focused on gold and an accompanying 36 element suite for pathfinder element correlation. This campaign has identified a strong, coherent gold and pathfinder element anomaly at Lantawan and a more subtle gold anomaly at Rockstar which are likely to be further evaluated by diamond core drilling.

Social and livelihood development programs in the affected communities within the project area are supported through various projects determined in consultation with the community and local government units. An ambulance was donated to the local Diwalwal community as were upgrades, repairs and provision of medical supplies to the Barangay medical centre, schools and community halls. Livelihood projects that have been supported over the past year to enable self-sustaining benefits to the community included small engine skills training and supply of tool kits, hog raising project for the Diwalwal women’s group and donation of materials for the Upper Ulip youth tribal group for construction of a Tilapia fish farm to support education opportunities. With the onset of COVID-19 in 2020, at the request of the Philippines government, funds from the community development program were reallocated to supply foods and medical items to combat the spread of the virus and support community members affected by the quarantine restrictions. Food relief provisions were provided to over two thousand households including donation of over four tonnes of rice, mutli vitamins, hygiene kits including face masks, hand sanitizer, disinfectant and thermal scanners, food supplies and hand washing stations were donated to the community and front line medical personnel. 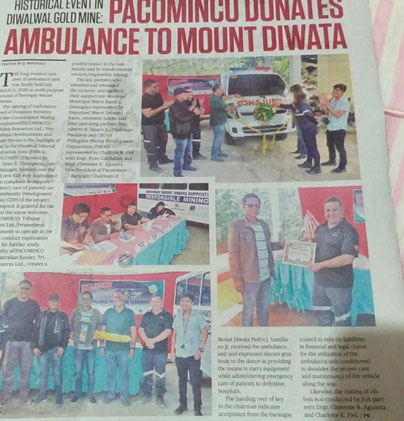 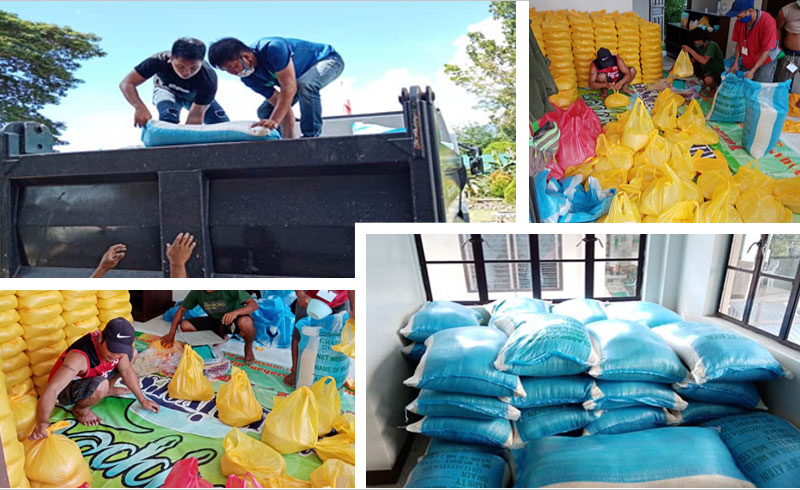 Donation of rice to local communities