Tribune and Rand share in the EKJV has remained constant over the life of the EKJV. Ownership of GEM has passed through various mining companies, Goldfields Ltd, Aurion Gold, Placer Dome, Barrick Gold, with Northern Star Resources assuming control of GEM and operational management of the EKJV in March 2014.

The EKJV is presently an operational underground gold mining project located in the Kundana area 25km WNW of Kalgoorlie and 47km NE of Coolgardie, in the Eastern Goldfields of Western Australia. The project comprises two producing underground mines Raleigh and Rubicon/Hornet /Pegasus (RHP). 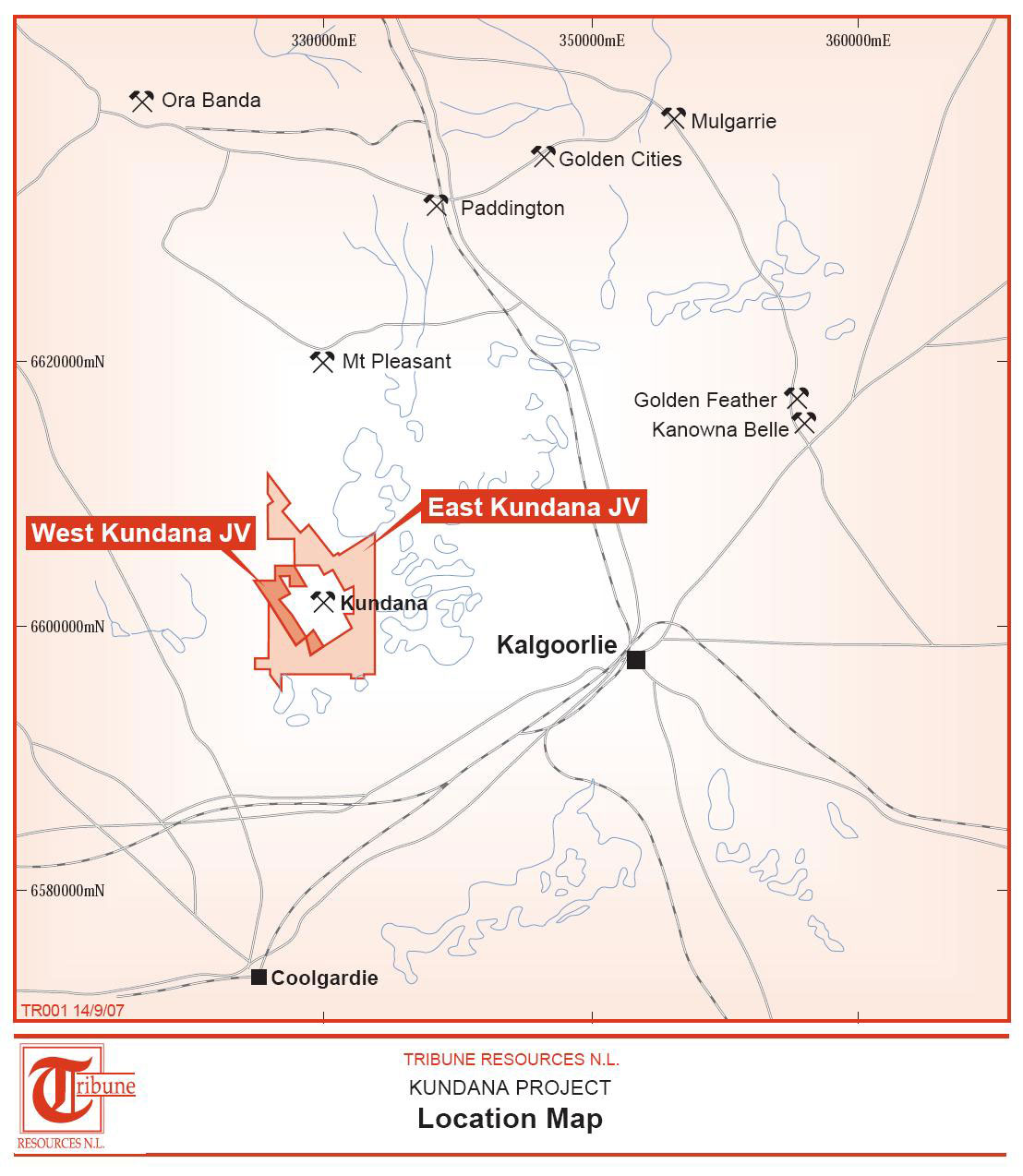 Prospecting and small scale mining in the Kundana area commenced circa 1895. Modern mining commenced in1988 with the development of several open pits in the area.

Tribune Resources and its sister company Rand Mining held leases in the district from the early 1980s, and formed an Exploration Joint Venture with GEM in 1997. Exploration success saw the creation of an EKJV Production Joint Venture Agreement in 2002 to conduct development and mining of the resources within the EKJV lease area.

Mineralisation at Rubicon was discovered in 1999. The project includes the Rubicon, Hornet and Pegasus ore bodies located on the K2 mineralised trend. Raleigh was discovered 2km NW on the Strzelecki trend in 2000. 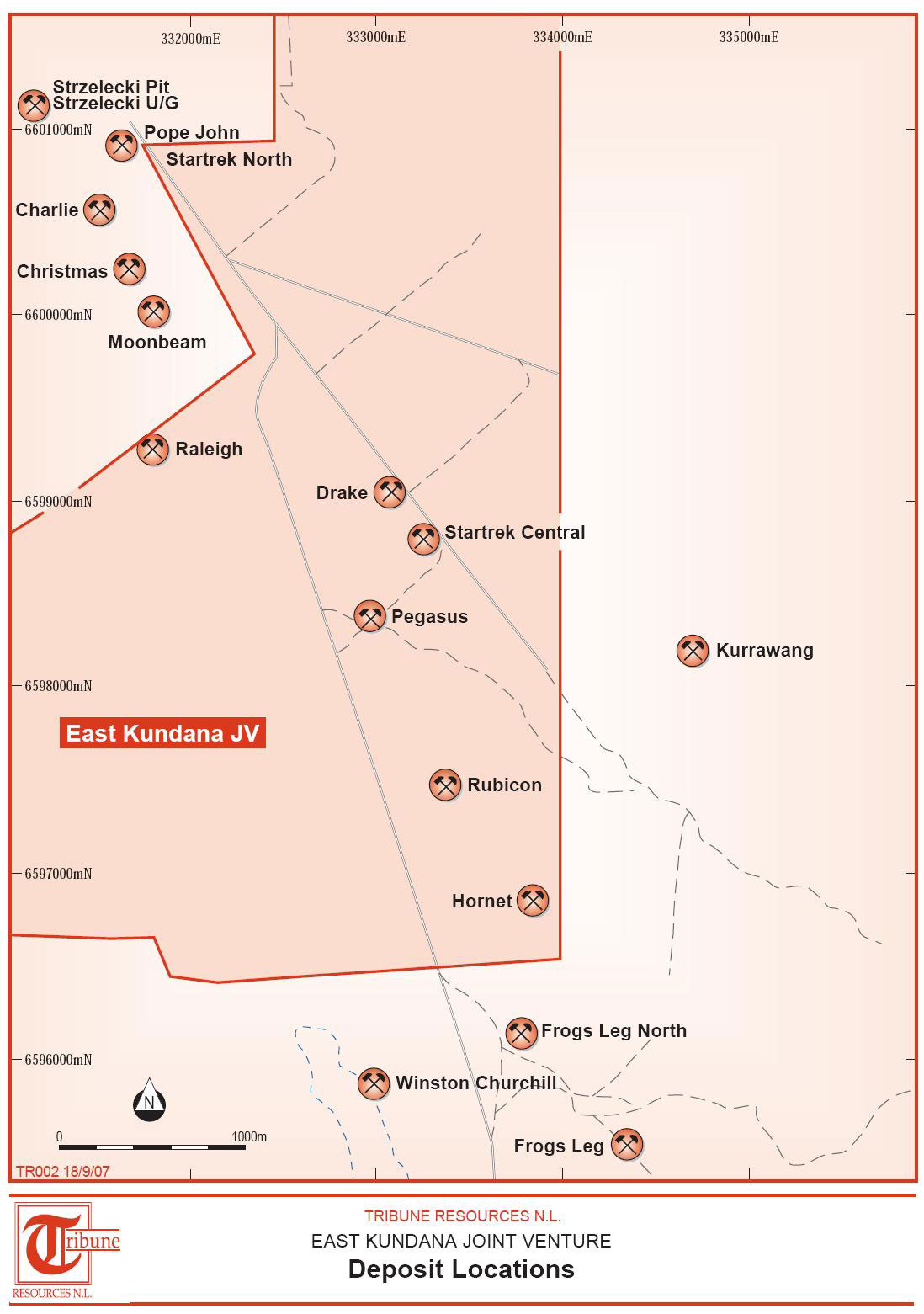 Open pit mining of Rubicon and Raleigh commenced in 2002 and was completed in 2004. Raleigh underground mining commenced in 2006 and at Rubicon-Hornet in 2011 and is ongoing.

Mining of the Raleigh and Rubicon open pits yielded 252,000 ounces of gold from 750,000 tonnes of ore at a gold grade of 10.4 g/t. To date, the Raleigh underground mine has produced around 1.16 million ounces from 3 million tonnes of ore at an average grade of 11.9 g/t, whilst RHP underground has produced 1.35 million ounces from 5.9 million tonnes at 7.1 g/t.

As of June 2020, 2.75 million ounces of Gold has been mined from the EKJV deposits, with the Tribune share of mine production amounting to 1.01 million ounces.

The K2 structure is the host for the Rubicon, Pegasus and Hornet ore bodies. It is a steeply west-dipping laminated sheer vein that ranges between 0.3 and 0.8 metres in thickness. The ore zone is typically wider than the vein structure (up to 5 metres) due to the presence of mineralised stockwork veins and breccia zones in the footwall. The vein typically contains coarse-grained disseminated galena, scheelite, sphalerite and gold.

Gold mineralisation at Raleigh is associated with a steeply west-dipping laminated quartz vein system hosted by the Strzelecki structure which developed at the contact between andesitic volcanics and a sedimentary unit in the footwall of a thick differentiated gabbroic sill (Powder Sill). Vein infill mineralogy is similar to that in the K2 structure.

The mining method at the EKJV underground operations utilises up-hole longhole open stoping with cemented paste backfilling of stopes. The Raleigh and Rubicon ore bodies are accessed via declines beneath the previously mined open pits.

A long section of the Raleigh mine workings is shown in the figure below.

Raleigh Long Section based on 2020 Life of Mine Plan

The Rubicon decline is developed from the open pit and is positioned to the west of the vein. Stoping is carried out by drilling up-holes between levels and mining panels along strike. Stopes are paste filled with material hauled to the mine from the Raleigh paste plant to provide geotechnical stability.

Rubicon Hornet and Pegasus Long Section 2020 Life of Mine Plan

Tribune’s share of ore has been processed through toll processing arrangements at a variety of toll treatment plants in the district. Joint Venture ore has also been processed at Northern Star’s Kanowna Belle gold ore treatment facility.

The ore is not metallurgically complex and is suited to treatment through plants with standard CIP flowsheets with installed gravity circuits. Gold recovery averages around 94% over the processing history.